If you’ve never been to Thought Bubble Festival in Leeds, then you should know that it feels like spending an entire weekend being hugged by a kitten the size of Estonia. Out in the real world, where there’s rusty lampposts, lots of drizzle and many grumpy bus conductors it’s easy to forget just how many people love illustrations and artwork: a lot, as it turns out.

This year was my first time exhibiting at Thought Bubble, and I was amazed by the number of friendly, welcoming and warm creative folk that descended on the event.

I’ve been meaning to get exhibit at Thought Bubble for years, but owing to forces outside of my control* I haven’t been able to. However, on a warm sunny morning in September 2017, (which started with only mild swearing when I realised I’d left my table cloth at home,) I set off for Leeds armed with copies of my picture book, I Have an Orange Juicy Drink, and a set of new limited-edition prints. It was all very new and exciting: like unscrewing the lid off a brand-new bottle of lemonade, only to discover someone has hidden a fiver in there. Only more more so.

Part of the beauty of being new to something like Thought Bubble is that you have no idea about convention. And as such, you can do daft things that no-one else thinks of. Like making friends by drawing your characters on helium balloons and giving them out to small children. It’s a great way to meet families who love picture books and stories, and when your stall goes quiet, you can also inhale helium and pretend you’re a chipmunk. (Really, it’s a win-win.)

The thing that really made my weekend though, was the people that I spoke to at my stall. From Holly & Team Ketchup (a brilliant organisation that gets kids excited about telling their own stories), through to Fay and her mum, plus one metric tonne of illustration students and a number of fine young grannies who wanted picture books for their grand-kids, I just had the most enjoyable of times talking about all things illustration.

It’s hard to pick out a single particular highlight from Thought Bubble 2017 but there was one particular thing that will stick with me forever.

I’ve been selling my limited edition prints over the internet for the last 12 months, and it’s a wonderful feeling each time someone chooses to buy one. Knowing that someone appreciates your style of illustration and wants to hang it on a wall is so satisfying, it’s almost impossible to put a price on it. (Although, the people at the student loans company have had a bloody good go.) I’ve sold prints in person, too, but it’s always been very much “Cool print. Can I buy it?”

On Sunday though, at 4.55pm (5 minutes before closing) a young lady walked past my stall and stopped dead in their tracks. She looked at one of my A3 prints, entitled Hope, and said “I really, really like that.” Rather than keep chugging helium, I explained to her the context of the piece. I said that it’s a picture of a little explorer lost in caves, with moths dancing all around him. And though it seems like there is no way out for the lonely little soul, the moths have a message for him – it’s written in Morse Code on their wings, and when you decode it from top to bottom, it reads:

THERE IS YET HOPE IN DARKEST NIGHT.

The lady stood in front of me said nothing for a little while, and her son, who was looking at my other work, chirped that he liked other picture sat next to it. At this point, the young lady before me gently explained to me that that she was going through a dark time of her own, and that this picture – my picture – connected with how she felt and made her feel better about things.

As she said that, something nebulous and intangible deep inside my chest felt like it had been hit with a sledgehammer made of a golden fire.

I’ve literally never felt like it before in my life.

As an illustrator, you usually think of all your seminal moments being the ones where you land a big client or win awards for your work. But to hear someone connect with a piece of work you’ve created – something so personal and intimate, in such an honest and emotional way, was just like nothing else.

I know there’ll be moments in the future when I’m sat in my studio cursing my sketchpad, and wondering whether all the pain and effort of trying to draw a new piece is worth it. I’ll wonder if I should be out looking for a better paid job or maybe trying to get a career in middle management with a slightly exciting pension. But I’ve promised myself that the next time I ask “is this drawing lark worth it?” I’m not going to give up. I’m going to stare up at my own copy of Hope that I have sat in my studio, and remind myself of 4.55pm on Sunday 24th September 2017. And then I’m going to say “Yes, Andy. It absolutely is.”

*mainly my own ineptitude as functional adult 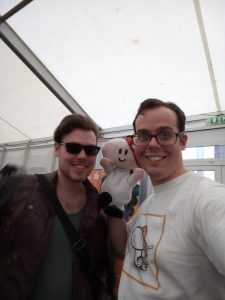 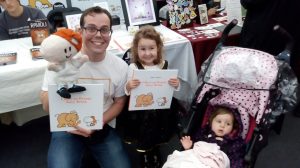 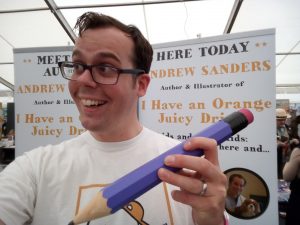 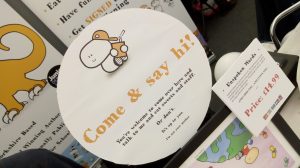 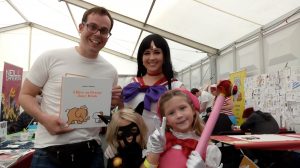 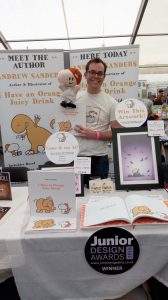 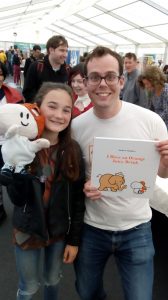 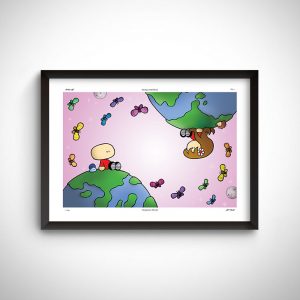 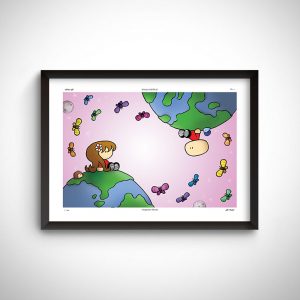 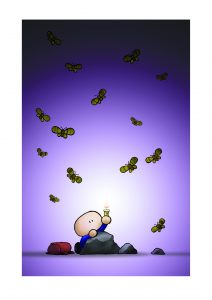 If you’d like to buy a copy of Hope or any of Andy’s other prints or picture books, you can access them via the products page, here. 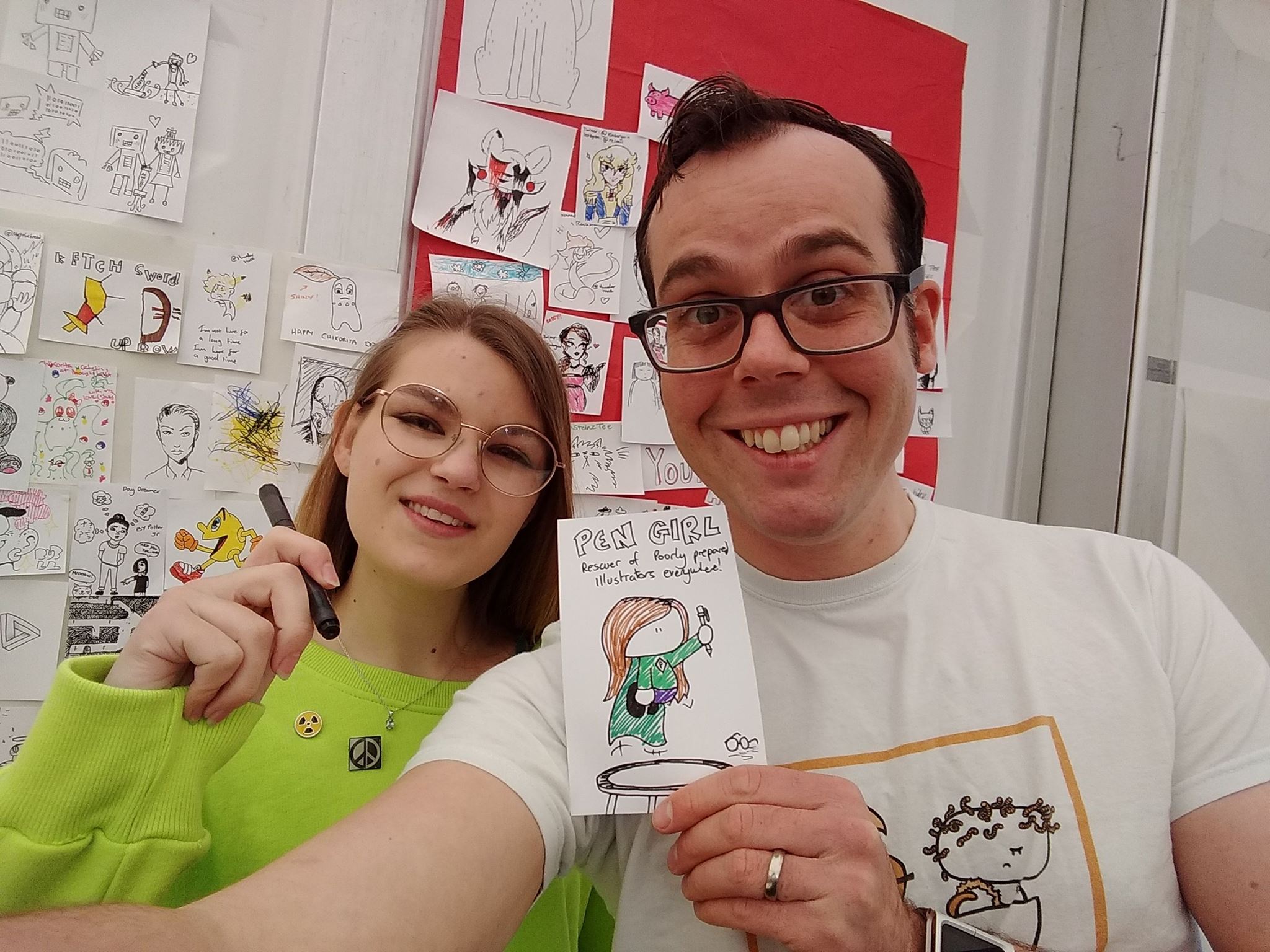 Thought Bubble is packed with a mixture of professional established artists and writers, enthusiastic amateurs, cheeky kids who have photocopied their own comic and everything in between. Every single person there is at a different Read more…